V160 SUPRA - TRANS REBUILD BY OTHERS

Yes, we know many others can rebuild the V160.  Yes, some can do it for less money.  But the question is, do you get what you pay for?  We created this page so you can make that determination yourself.

Recently, we had two V160 units show up which were rebuilt by other people in the past.  One unit was never installed or used, and the other was working for awhile, but failed.  The reason others can sometimes perform a build for less is due to the fact that they don't replace the synchros with the latest revision, and they also perform the bare minimum in repairs to get the unit running.  So forget about longevity and a nice shift.

The pictures below are of a unit we took apart which was shipped to us by a customer who just had the unit rebuilt, but was not very confident, or happy, with the work.  The customer claims the trans was at the builder for 7 months.  He never installed the unit and shipped it directly to us.  When we took the end cover off, it looked like someone smeared grease all over everything.  There was so much grease, and Loctite, that it was a nightmare to take apart: 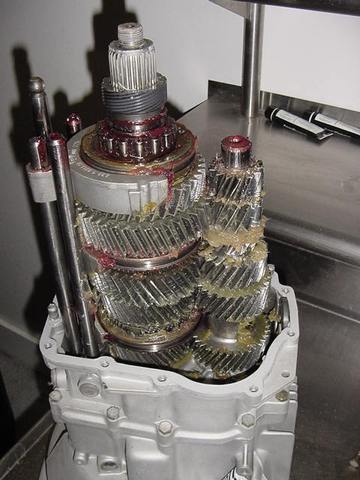 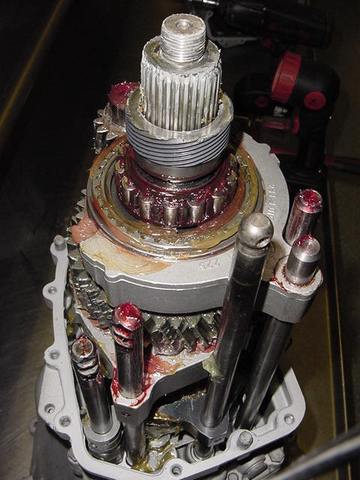 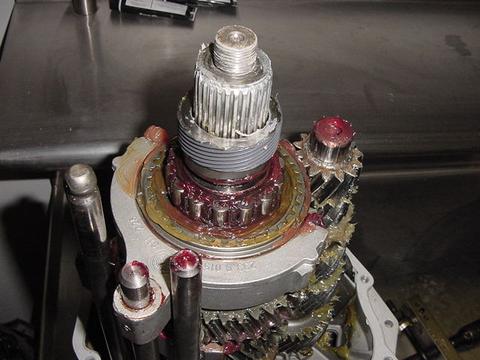 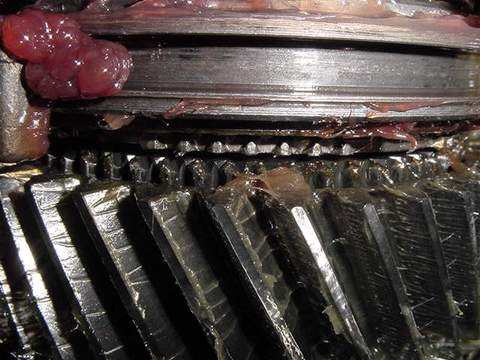 Greasing up a synchroed trans with so much is not a good idea.  Gear oil, or the proper assembly lube, is the right way.

When we got to 5th gear, we found that someone heated the hell out of the gear to get it off the shaft previously.  With these units, heat only makes removing the gear worse.  They got the gear so hot that it changed color.  We see some units where they melted the gear and case.  When you do this to a treated gear, it loses a lot of its strength.  We have the correct tools and DO NOT heat the gears to pull them off.  In the picture below, the gear on the left is one from the greased up trans which was removed improperly, and the gear on the right is one that was removed without compromising it by using the correct tools.  You can also see the large amount of red Loctite that they used for the bolts, which created a disaster, as we had to break the bolts to get them out.  The bolts have lock washers and do not need Loctite.  Why they put Loctite all over everything makes no sense. 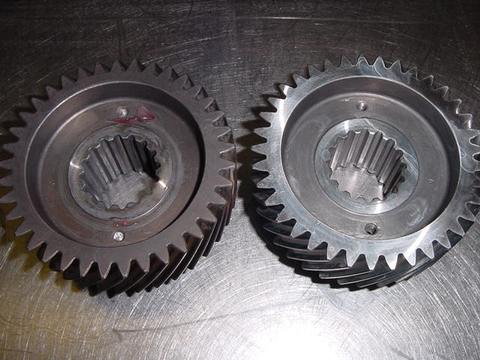 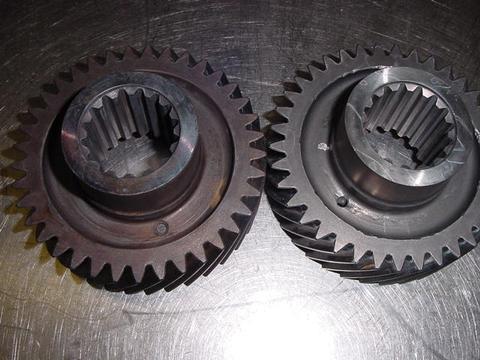 We also had to break off several other bolts to remove them as Loctite was used everywhere.

When we finally got the gears out, and inspected them, we found many other issues.  This trans had a synchro problem before, and in order to do a quality repair, you must replace the synchro assembly, and gear, if there is extensive damage.  What they did to this trans was replace the synchro friction ring only, and left everything else alone.  So the slider, hub, retainers, balls, springs, and inner and outer rings were of the old revision and looked terrible.

Replacing ALL of the parts with the latest revision is expensive and not replacing these parts is why people can do these builds for so little money.  In fact, with how little is replaced by others, they actually make more money than we do.  The more you spend with us goes to the expensive parts in which we replace.  It's no wonder people keep having the same synchro issues over and over again.  It is due to the fact that very little is replaced and such poor attention is given to the details.

With us, we replace EVERYTHING synchro related to the latest revision.  Parts like sliders, hubs, retainers, balls, springs, the updated bronze friction rings, and the inner and outer rings cost a lot of money, but is necessary for a trans which will not only shift beautifully, but live too.

The engagement teeth on the gear were also badly damaged.  Reusing a gear with damaged engagement teeth will give the driver notchy shifting and can cause the shifter to pop out of gear.  Picture of the 3rd gear below: 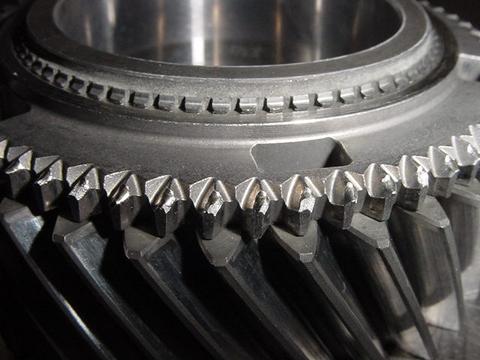 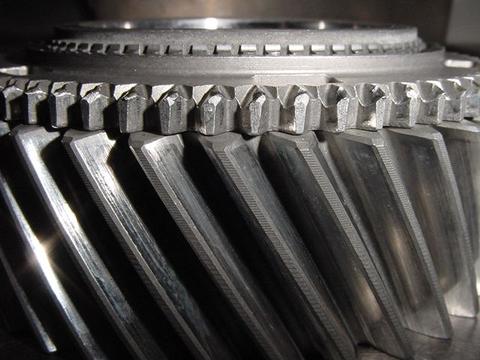 Why go through all of the trouble of tearing a unit down, cleaning it, and not replacing the rest of the parts needed for the assembly to work correctly?  It's details like this that make the difference, and we would never allow a gear in this condition to be put back into service.

Shift fork pins are also a reliability concern in the V160.  The OEM pins are known to back out and cause failure.  In this trans, someone reused the old problematic pins.  To make them feel tight, you can see where they tried to crush the pin.  So much about this is wrong: 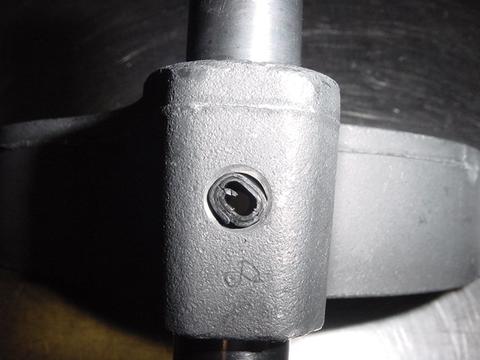 We do not reuse the old pins.  We thread the hole and install a hardened bolt to prevent failure. 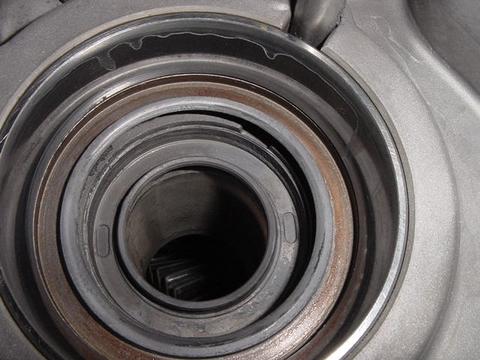 We replace all seal as standard procedure.

So that was a unit which was rebuilt and never installed!!  Is that worth the $500 savings??

Below is another unit which was rebuilt by someone in the past and failed.  This unit also had 2nd and 3rd gears which had extensive engagement tooth damage, but were reused.  2nd gear on the left and 3rd on the right.  We also found that, again, like every other rebuilt trans we have run across, that all of the synchros were of the old revision: 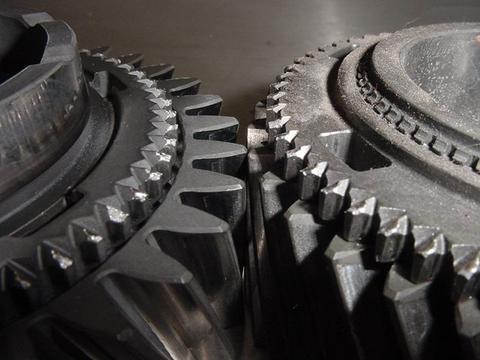 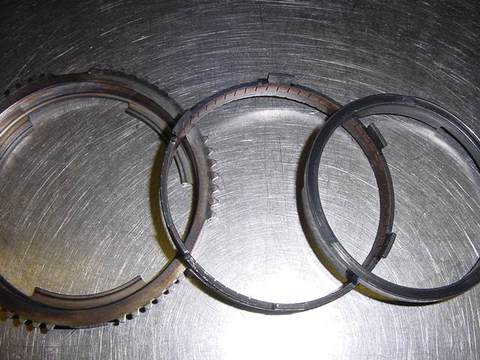 It's no wonder these units don't live, and many customers have their doubts as to buy a new unit, or risk rebuilding the old one.  With us, you will get everything you paid for and have a trans that will shift better than when it was new.

So why are we better?  If what we showed you above wasn't good enough, here are some details of what we do.

The synchros will make or break the feel of a trans.  Synchros and gear engagement teeth which are set up correctly will make your V160 not only live for a very long time, but also a joy to drive!

Below are a few pictures of the new revisions of synchros we use.  We have a new revised bronze synchro on the top and the old revision brass friction ring on the bottom.  Bronze is better as it is a harder material.  It will be able to take more abuse from the driver and live longer.  Also note the larger oil channels to help squeeze the oil away faster for quicker shifts! 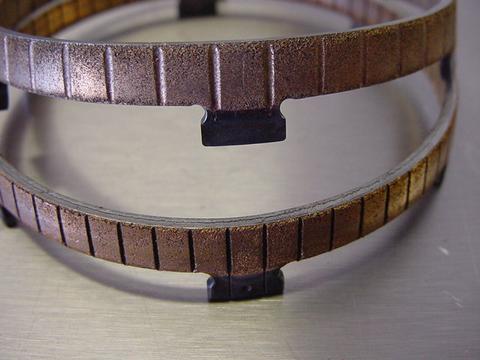 Not only do we install that awesome friction ring, but we also update the inner and outer rings.  Below is the old version, on the left, and new, on the right. 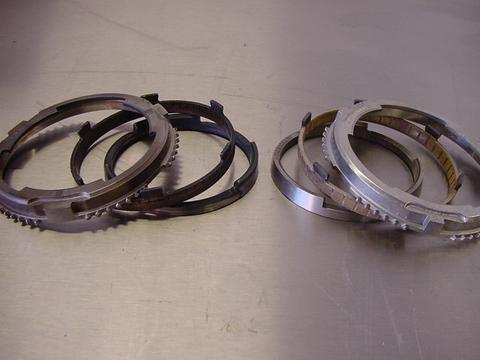 In order to use the new revision of the outer ring, the hub and slider assembly needs to be replaced with the new version as well.  The new hub and slider is completely redesigned!  It has a new revised ball and retainer assembly to allow for better preloading of the synchro, to allow for faster and smoother high RPM shifting.  Note in the picture below how the new retainer sits snug around the hub on the left, and the old version, on the right, is loose and not as accurately fitted: 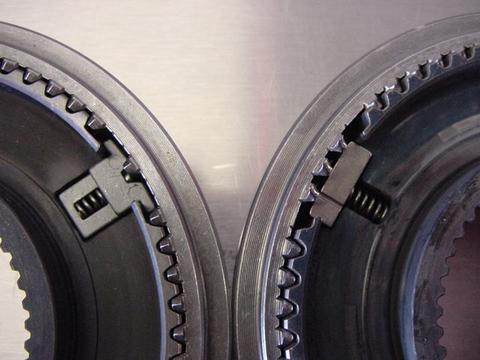 Healthy engagement teeth are also overlooked by others, but is a critical piece to replace if it is not healthy.  Below is a picture of a worn gear on the left and new on the right.  It is terribly important for the teeth to have a sharp point to them for a quality shift.  If they are ground down, like the gear on the left, it won't work correctly: 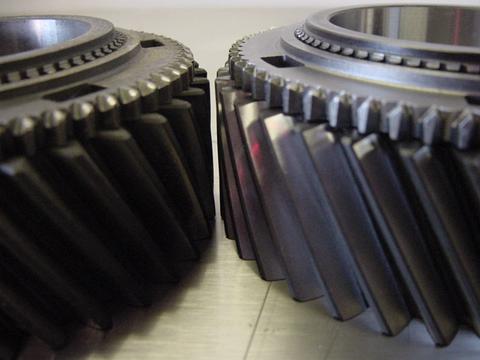 All of this, including our state-of-the-art cleaning equipment, will give you a quality trans.  Why risk a trans that will not live and shift like garbage for only a few hundred dollars?  For the amount of labor and quality parts we install into your V160, we are a bargain!  Ask the cheaper guys if they will replace the parts we do for the same price.  I would be willing to bet they can't.

We also perform synchro detailing found HERE for the higher end rebuilds which we offer.

Please feel free to contact us anytime!  We would be more than happy to help you with your transmission needs!

Our rebuild options can be found HERE