Over the years we have been trying to keep the costs as low as possible for the GR6 transmission units found in the Nissan GT-R.  We understand that many owners can't afford to drop $20,000 on a trans rebuild so we tried to pull some of the more expensive options out of some of the units we offered and listed them as a budget option.  The goal was to give everyone the opportunity to upgrade their transmission for their power goals even at low cost.

Well, this was good and bad.  The good thing was it pulled pricing down a bunch for transmission builds in this platform which is great for the customer and it also got us a lot of business from those who could not afford a bigger trans build.  The bad is the customers started to expect a trans which would live forever using mostly OEM parts.  In the end, the customer would break the trans and we would take a hit on our reputation and financially as a company when the customer would get mad about the failure and gripe about it online deterring others from using us.

A series of transmissions which we offered with good intentions turned out to be a nightmare.  We didn't offer enough of an explanation as to the risks, and the customers didn't do their own research to learn about the drawbacks of a lesser build.  When the trans broke, they would end up going to a different vendor and that's not good either.  We want to keep our customers and we want our customers to be happy with their purchase.  The rebuilds we now offer covers all bases when it comes to your GR6.  If you order a trans build from us you get the best in parts and quality.

If you think you don't need a quality build, think again.  Let's put an example out there as to the average failure for a 'budget built' trans.  Let's say you want to make 900ft/lbs of torque, but don't have the money for a 1000ft/lb trans which would be recommended for your goals.  You want to upgrade the clutch and 1st gear to hold the power, but will take your chances with the factory 2-6 gears, because you think the risk to take on such a high cost upgrade is low enough to make it worth it.  You call and talk to us and we tell you that you will be lucky to get a season out of the factory gears and you WILL break it.  You don't care and do it anyway.  Here are the costs:

A few months go by and you are doing a pull in 5th gear.  Trans feels like it just popped into neutral.  You find all gears work but 5th.  5th just isn't there.  You drain the fluid and find metal in it.  You then call me up yelling at me that my transmission sucks and it failed.  You then talk to a competitor which agrees that my trans sucks (of course) and you make a post about it on social media to bully me into refunding your money.  I don't do refunds for deals like this, so you reluctantly take me up on my offer to take the trans back and fix it.

I get the trans back and find what happened is exactly what you were warned about and that you now need a gear set.  But, it's now not that simple.  When 5th gear broke it sent a piece of a gear tooth into the main valve body shifting piston ruining the piston so that has to be replaced along with the main valve body housing.  We also will find pieces of metal inside all of the solenoids which ruins them as well and will have to do a complete tear down, cleaning, and inspection of the unit to assure no other problems come up after a failure of this type.  We know if it fails again you will go into meltdown mode so we can't have that.

When a gear breaks it's a lot worse than you think.  The gear will break in a way which will send metal all over the trans.  All of the filters will be ruined, all solenoids are ruined, seals will be damaged, every part of the trans will have metal in it which has to be removed.  If that's not bad enough, sometimes the shafts are also distorted and bent from the failure requiring checks and replacement of those expensive components.  It's a big mess and the money you saved in the beginning is about the look like a really bad move.

Here's a broken 5th below.  Note how chunks of the gear teeth have broken off.  This means those pieces are everywhere else in the unit. 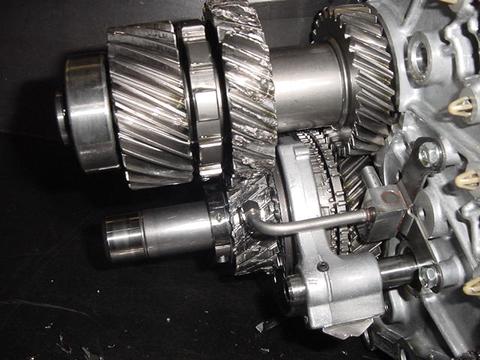 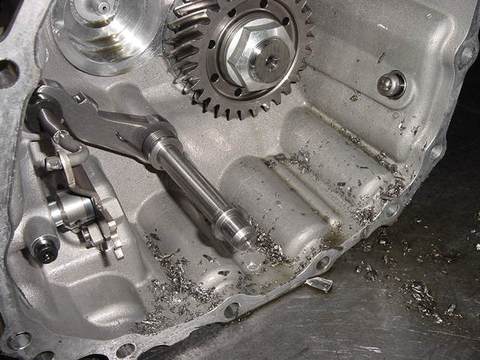 There may be damage to the shifting piston in the main valve body.  If it's damaged, then it's also likely that the valve body case is also damaged.  Here below is a pic of what a gear tooth did to a shifting piston.  A good used valve body goes for at least $1000 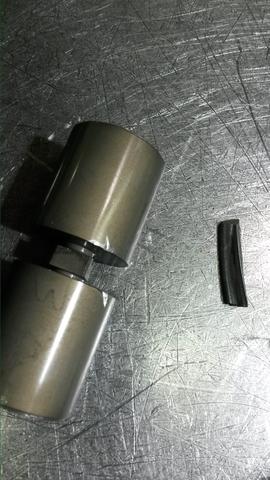 If the valve body can be saved then it needs to be torn down completely for cleaning and inspection.  Here is 1 part, just 1 part of this transmission below- the valve body.  Only 7 filters and 7 solenoids in this thing.  If we can save the solenoids, we have to take them apart and clean them which is not easy as they are essentially crimped together. 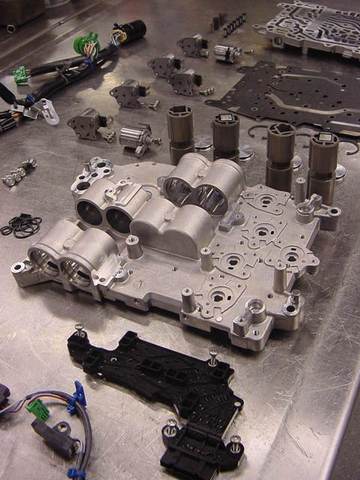 The solenoids are like large magnets.  What happens when you have a bunch of metal from a broken gear in the fluid?  Well, a lot of it collects in the solenoids.  If you do not replace or repair the solenoid the metal debris will stay inside the assembly and damage the bushings inside.  Sometimes we can take them apart and clean them, but that's hit or miss depending on the wear inside already.  It's best to just replace with new.  The debris inside will eventually cause the solenoid to stick and then fail.  In the pic below is a solenoid which has been forced apart.  The cylinder (2nd part from the left) has to stay in perfect alignment in the housing and the end-bushings have this job.  The pins sticking out of the cylinder have to slide in the bushings without any play or debris inside.  If the solenoids run with debris in the bushing the bushing will wear and the cylinder will no longer be centered in the housing causing it to jam.  Unfortunately, I do not have a camera good enough to take a close pic of a worn bushing to show you, but hopefully you get the idea. 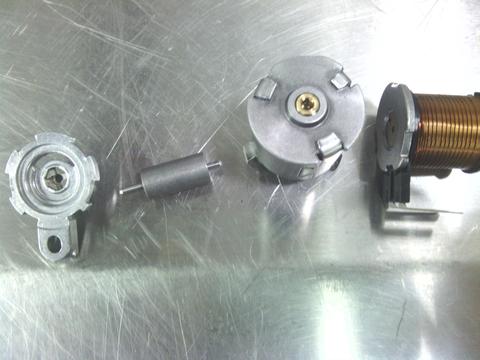 There are gear and bearing oil squirters all over the unit.  They will all have to be cleaned.  Since the GR6 is a trans which has gears above the sump, they do not get any oil unless the squirter feeds it.  If the squirter clogs, then you just lost another gear set. 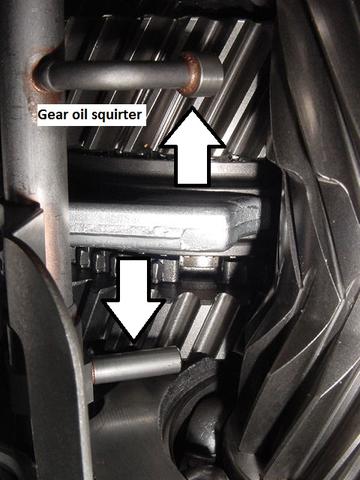 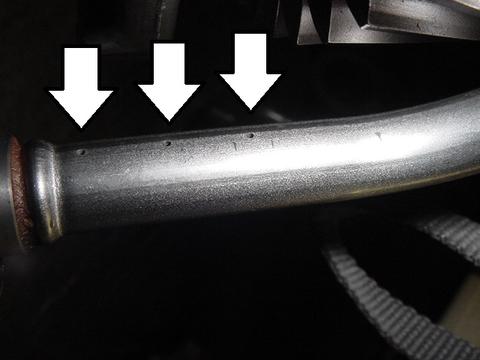 The main sump filter and line filters have to be replaced.  Here is a sump filter which is cut open to show the junk inside: 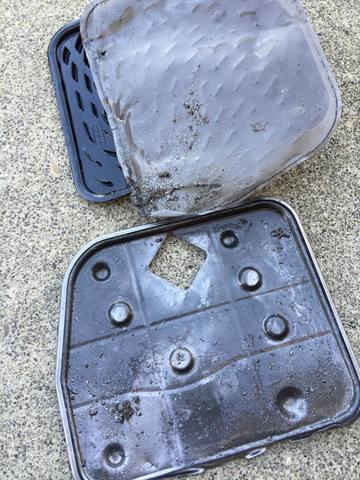 A few more items which need to be cleaned:

Basically, every piece of the trans needs to be torn down to the last bolt, inspected, cleaned and reassembled.  It's a very time consuming process and the GR6 has a lot of parts in it.

Now let's go back to costs.  Let's say that I'm a nice guy and charge $0 labor for all of this work I had to perform to save this trans.  We still have a long list of parts which need to be replaced:

All of these pieces including a nice new Albins 2-6 is $9800.  Keep in mind that doesn't include days of labor on my end.  So we have:

Now we have a new total after rebuilding it twice of $20,800 and a bunch of frustration on your end with downtime and learning to hate me all in 1 process.  Is it still worth the risk?  The original cost to do it right was $14,900, you just blew away $5900 and days of your time and my time by going cheap.  We have changed our site to try to push you to do it right the first time by choosing any of the quality builds found HERE.  However, to be fair, we are offering 'build your own GR6'.  This has you take the responsibility of having us assemble the build you wish at a low budget.  We also explain that we can't warranty that type of trans either as we have had enough of getting our butts kicked by failing budget units.  That's all on you and we are no longer taking responsibility for it.  We are just merely assembling what you choose.

We apologize if this page seems harsh, but it's the truth and the truth sometimes hurts.  We like to support our customers and most of all have happy customers.  If you break something due to a cheap build, it's always a mess.  Let's work together to get you a trans which will hit your goals and make your car a fun experience!  Breaking in front of everyone at the track is embarrassing.   Towing your car home is frustrating.  Starting over on an already expensive build is disheartening.  It's not worth it.  Let's do it right the first time!